Guti (35, Slovenian) and Sig (50, Icelander) wake up naked and handcuffed to one another on a riverbank near Ljubljana. Sig suffers from memory loss, while Guti recalls a fight with skinheads Sid drunkenly participated in and Guti tried peacefully to intervene in. Sig has no passport or any clue about his identity—the skinheads have taken everything he owned. Guti is trying to build a new home for himself on a river raft after losing his house to the bank and his life to his ex-wife. He introduces Sig to his friends—suburban misfits, who remind Sig of a legend of the hidden people. The film is a fairy-tale dramedy about new beginnings. It is also a self-ironic story about small countries and nations (Slovenia and Iceland) in the “big” Europe; about the unexpected connections that can help us find our place under the sun and continue with our lives. Finally, it is also about a vast number of invisible people who feel like “internal refugees” in the European societies they are a part of. 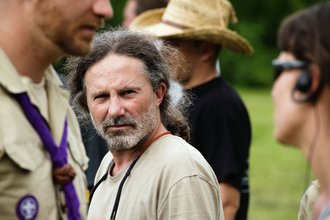 Miha Hočevar (1963) created and directed hundreds of commercials—including certain TV commercials that have been very successful and popular. He writes scripts too. So far, he directed five features and several shorts. Three of his features – Going Our Way 2 (2013), Going Our Way (2010), and Fuck It (2000) – were major box-office successes in Slovenia and are second and sixth biggest Slovenian box-office hits of all time.