The Last Day of the Patriarchy

This night will most likely be Ivo’s last and he knows it. Behind the doors of the hospital room, his family and friends are waiting. Ivo’s grandson comes to the hospital with his new young pregnant girlfriend. When he introduces her to the old man, Ivo asks if he could see her breasts. In the hallway, his wish becomes a public affair. Everyone realises this might be his last wish, but at the same time they try to stay more or less considerate towards the young woman. How will the family solve such a delicate situation? And is this truly Ivo’s last wish? 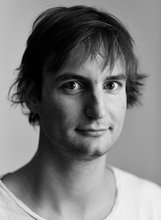 In 2011, Olmo Omerzu (1984) graduated from the FAMU (cz) with his first feature A Night too Young (2012). After the film’s successful premiere in the Forum section of the Berlinale, Omerzu won the Czech Film Critics’ Award for the Discovery of the Year. His second feature Family Film (2015) premiered at the San Sebastian FF and was invited to numerous IFFs, including the Tokyo FF, where it won the Best Artistic Contribution Award. The film also received the awards for Best Film and Best Screenplay at the Czech Film Critics’ Awards. Omezu’s latest feature Winter Flies (2018) was screened at the Toronto FF and won the Best Director Award at the Karlovy Vary IFF.