The central stage of the film is the city of Trieste – one of the commercial and cultural centers of the Austro-Hungarian Monarchy in the early 20th century. At that time, “new art” flourished: cinematography, which, in conjunction with the then-unknown writer James Joyce, enabled a group of aspiring Trieste citizens to become a part of the film history of Slovenia, Italy, Ireland, and Romania. An ambitious team of cinephiles opened theatres in the early 20th century – not only in their own city but also in Bucharest and Dublin. Obviously, they were not bothered by any customs barriers, tax restrictions, special state regulations, national or ideological prejudices… They share their love of the new art – and of course the earnings with it – and see the European space as an open venue where one can feel at home practically everywhere. Kino Volta is a film about nostalgia for a historical period long gone, for a vision of dreams, ambitions, and enthusiasm for a new means of communication that we nowadays take for granted. The screenplay is based on a novel by the prominent Slovenian writer Drago Jančar. 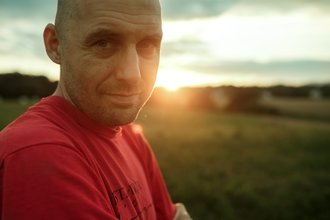 Fabula, an independent Slovenian production company, founded in 2000, produces and co-produces feature and documentary films for national and international markets. Our goal is to make films with good ideas, artistic potential, and unique value. The owner of the company Radovan Mišič studied film production at the FAMU in Prague.
director
Martin Turk