Slovenia, the spring of 1999. Two friends from a small village decide to transform their mopeds into choppers and embark on a journey. Looking for freedom and love, they travel through dreams of the past and visions of the future. Driven by mad impulses and haunted by the conservative moulds of traditions, they start believing and understanding things previously unimaginable. On the road through Slovenia and Croatia – two countries that have just recently seceded from Yugoslavia – they are accompanied by a young runaway woman with a mysterious past and an old biker who has seen the world in search of freedom but has still not found it. They challenge themselves and each other through shared experiences, severing their ties with and conceptions of the old and thus making way for the new. However, the path is treacherous: with the sudden death of a companion, their friendship is at stake and the pain is unbearable without someone to blame. Personal values are tested, God’s purpose unclear, and free will questioned. The protagonists’ road trip is not what they expected, and to break free they must endure a quest for identity that irrevocably changes their lives. A timeless story about the search for one’s true self. The use of poetic realism and unconventional structure puts the viewer in the driving seat of this thought-provoking and emotional journey. 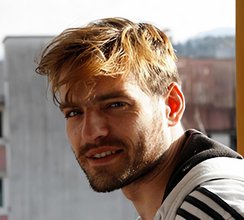 Dominik Mencej (1987), writer and director, graduated in film and TV directing from the AGRFT. Worked as a director on many TV series. Best known in Slovenia for his award-winning and critically-acclaimed magic realist short films. Interested in finding new ways to tell unconventional stories. Mencej’s filmography includes: Growing up (2017, with S. Gačić, documentary), The Springtime Sleep (2014, fiction), and Garbage Day (2011, documentary short).